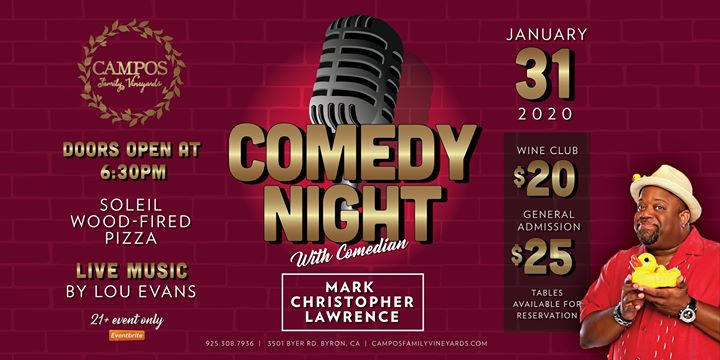 Join us for an evening of great music and belly laughs!

Join us for an evening of live music by acoustic guitarist Lou Evans followed by the hilarious Comedy of Mark Christopher Lawrence!
Soleil Wood Fired Pizza will be available for purchase as well as beer and wine!

Doors open at 6:30pm, Live Music from 7-8pm and then again to close out the night by Lou Evans, Mark Christopher Lawrence will take the stage at 8pm.

You may have seen Mark Christopher Lawrence on the Big Screen with the talented Will Smith in The Pursuit of Happyness or in his most acclaimed role of “Big Mike” in the TV Series CHUCK. He also is a regular on Dry Bar Comedy!

Tables of 8, 4 and 2 are available for purchase. General Admission seating will NOT be at a table but in a bank of chairs.